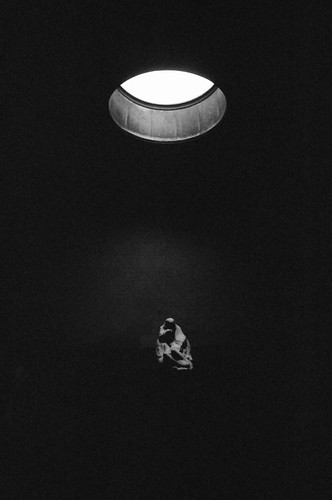 There’s lots to see and read about out there on the internet already about this 35mm film camera, so I figured it was worth adding my own experience of it.

First of all I’ve owned three, but now only have one. I lost the first one in Barcelona in 2010 in a mugging, and it was all the kid stole – surely worthless to him (he wasn’t even a hipster and looked too young to know what film was) but annoying for me. A few years later somewhere between Canada and Ohio I lost another one in a jacket pocket/gloves/winter weather combination (several days after a long road trip it just wasn’t there). When I had all three I had no problem handing them out to friends for double-exposure projects (they shoot a roll of film somewhere far away, then they bring it back to me and I take more photos over the top of theirs; neither of us know what the other took or how they’ll be combined until the film is developed), but now I just have one it never gets lent out and has my email address engraved on it and a plea to return it if it ever becomes lost (I’m taking it to Japan with me later this year and will not be letting it out of my sight).

You see, I love the Vivitar Ultra Wide and Slim.

It takes really good pictures. It only takes a few types of photos (always in good bright daylight – buildings from a distance, things in silhouette, landscapes and cityscapes) but they have a high rate of success and the natural vignetting and generous wide angle (with a good sharpness in the centre of the lens) contribute to a very human-pleasing image. Our own eyes have a wide angle of vision after all, and we have a large amount of peripheral vision that isn’t razor sharp or in HDR. So the little Vivitar’s fuzzy-round-the-edges world view makes composition really easy.

The “Viv” is diminutive as far as film cameras go. It’s easy to fit into a pocket for example (but perhaps a bit too easy; the Barcelona mugger’s “in” was his belief that it was a packet of cigarettes – when he’d eventually yanked it out of my pocket and had run off I went to a shop and replaced it with the only packet of cigarettes I’ve ever bought). It’s also totally unpretentious mechanically; everything is plastic, clicky and a bit weak feeling, but the upshot is you don’t agonise over exposures or shutter speeds. You just compose…and click. So it’s a perfect travelling companion; fill it with any film (UK readers should stock up on Poundland’s Agfa rolls whilst they’re still on the shelves), put it in your bag or coat pocket and go out into the world. Shoot when you feel like it (bearing in mind sunny weather and something to make the most of all those wide angles) and then forget about it. When the film is eventually developed (I have my negatives scanned to CD at the same time) you can enjoy analogue memories of times past.

The appeal of such a great little tool means it’s pricier on auction sites than it ought to be. Look for second-hand shops or car-boot sales (or their equivalent in your locality) for better bargains. If you are desperate to try some plastic Vivitar action but don’t want to pay lots then try their other cheap point-and-shoot models; there always seem to be a good stock on auction sites (but watch out for the panoramic ones which often have a mask inside which cuts out a lot of the film area to make a “wide” image – the IC101 is an example; if you feel confident with camera surgery however you can pry this out to get the full frame back). Get in there for no more than £4.99!

3 thoughts on “The Vivitar Ultra Wide and Slim”