Or, at least, a year ago. Time is noticeably flying by faster as I get older and older.

I took this photo in New York a year ago today on the Staten Island Ferry. It’s a good way to see the Statue of Liberty and the Manhattan Skyline, and it’s free. 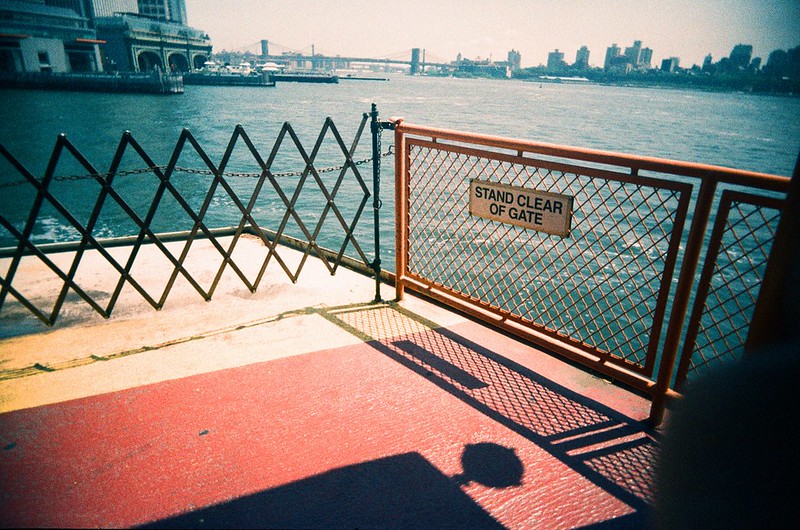 This was taken with a Vivitar Ultra Wide and Slim on expired Kodak Ekachrome 160T film, which I then had cross processed. I had a stash of this which I obtained a few years back from World of Photography in Columbus, Ohio, and I love the creamy, pinky tones that it gets. Nothing like the crazy greens and blues you often get with cross-processing slide films. The T means it was originally balanced for tungsten light which has a yellow cast.

I shot my last roll of this in Rome a few weeks later. I could go hunting on eBay for more, and maybe I will some day. But right now I feel like I need to buy some more fresh film to remind the shops and the distributors and eventually the film companies themselves that there’s still a market for it.

Over on Flickr right now I am uploading a batch of pics I took in summer and autumn last year. I spent Christmas in the States and shot about 6 rolls of various films, but commitments at home have prevented me from getting them developed. Apart from a trip to Iceland in February I’ve not been actively shooting film much this year so far due to a run of bad luck with multiple illnesses and a lot of demands from my life.

My output is always going to be behind the times. I think about the future all the time and try to live right now in the present, but I reflect on the past a great deal too. The built-in waiting time of film is a lovely way to do this.

One thought on “It’s yesterday once more”