Here are four pictures of the seaside at Nice from a recent trip to the south of France. The first shot was done on my work’s cameraphone, a Google Nexus 4. I’d got the white balance wrong and so you get this very blue-biased cast to the shot, but given that I was there in March when it wasn’t that warm it’s actually quite a nice representation of a chilly printemps sur la plage. 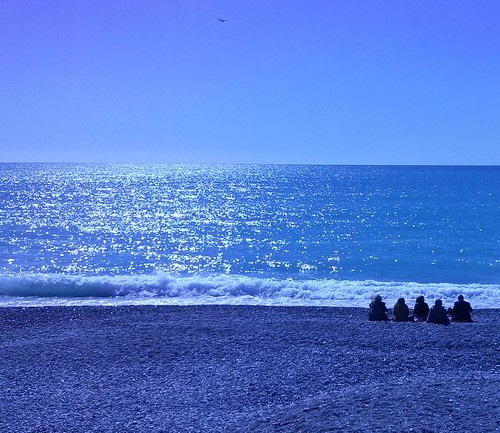 If you look hard you can see an aeroplane. I often think the proximity of the airport in Nice to the beach is a tantalising reminder for most visitors that their time there is short and that going back home is inevitable.

The next three were shot with a Vivitar IC101. This is a plastic pocket camera that is meant to shoot “panoramic” photos. In reality this means it has a mask inside the camera which cuts out the top and bottom of the normal 35mm image to render something cinemascope-y looking.

To me that’s both a massive waste of film and an invitation to tinker, so I pulled mine out. In fact, I’ve had three of these cameras and made the modification to all of them (one was given away to prevent someone spending too much on an Ultra Wide and Slim, and one was sent to someone loaded with slide film for a doubles project and they never sent either the camera or film back). 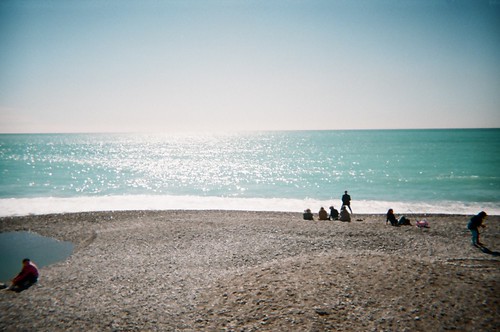 You don’t quite get an Ultra Wide and Slim from this mod of course. I think the lens on the UWS is 22mm and on the IC101 it’s 28mm, and I’m of the opinion that the UWS is all-round sharper than the IC101 (camerapedia says the UWS has a two-element lens which probably explains that). But if you are seeking vignetting by shooting through a plastic lens anyway don’t you want a bit of squidge? 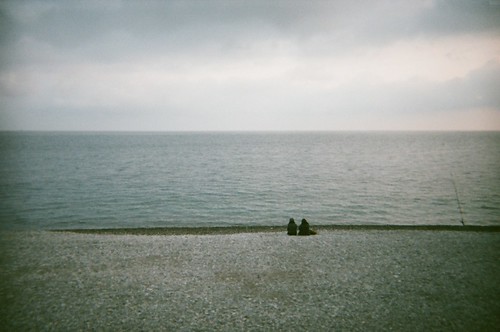 Either way, it’s fun to poke some plastic into the general direction of the sun and burn some photons onto some light-sensitive emulsion. Does you the world of good. Just look at the girl riding her bike along the Promenade des Anglais in the picture below and imagine the sound of the waves and the sensation that in just a few footsteps time you will be walking onto the shore and down to the sea. Holidays. 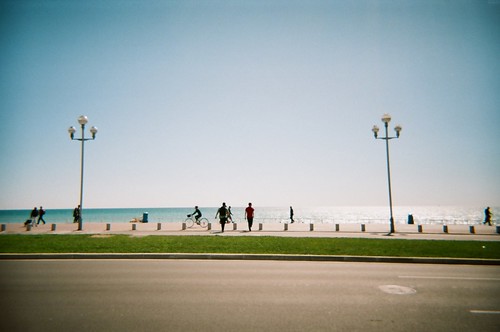 The top two incidentally were shot on 400ASA film, pulled from a Fuji disposable camera. The last one was on Kodacolor 200ASA film that was out of date. Again, when you’re pouring in the photons through a plastic lens with no control over anything else you can pretty much play with any sort of print film. Never managed to get any slide film into one of these (reminding me again of the scoundrel who never returned the IC101 I trusted to him for a doubles project).