In a recent blog post on Film Photography London, Sandeep reflected on “why bother shooting film if you don’t even develop your own film or own a darkroom?” and commented “I always equate it with the football analogy of I can’t be a proper fan unless I go to away games”.

Pah, develop and printing your own shots? Well, why shoot film if you’re not going to prepare your own emulsion, coat your own negatives and of course build your own camera (and don’t think you can get away with not grinding your own lenses)?!

It isn’t a fact that if you don’t do what me and my mates do, you’re not as much of a do-er as us. Some people would like to tell you that it is, but it isn’t. It’s just an opinion, and a mean-spirited one at that. 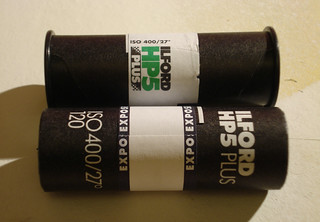 It is a fact however that until you take your photograph, you haven’t taken a photograph. Everything before or after that is part of many processes that come together to allow that to happen. There may be a few people in the world who can play a part in all of them, but most of us can’t.

I’ve done darkroom and home developing and printing in B&W and colour, and I think it’s great. But I don’t have the space, time or money to do it right now. If I have to get someone else involved in that process then so be it – they are still developing and printing what I chose to photograph. Of course they may have an influence in that, but so do lots of people.

And so it is with D&P right now; the labs that I choose do what I ask them to do, at a time that suits me, and they pay more attention than I could to fresh chemicals, the temperature and purity of the water, washing the negs, keeping the scanner clean, and turning my moments into something I can reflect on. This helps me enjoy photography and (sometimes) get better at it.

In the future I might go back to developing and scanning my own films, and maybe even printing. I might even get good at it! But for now not doing it does not stop me shooting film.