What is DXing? – Well, let’s go straight to Wikipedia for that one! “DXing is the hobby of tuning in and identifying distant radio or television signals”.  It’s a hobby I’ve done since I was very young, like 10 years old.  I got a radio-cassette recorder for my birthday that year and it had medium, long and short wave bands, as well as VHF (FM nowadays).  I used to love making tapes and things, but became fascinated by the radio too.  I would tape the Radio 1 chart-rundown fanatically on a Sunday, but one day when I was ill and off school I was playing with the radio and tuned into the BBC World Service, which started out in English but ended up transmitting in French. My parents explained about the station and how they were broadcasting to the whole world.  I slowly came to realise from tuning around the bands that the rest of the world was broadcasting back to the UK too, and that there were also all these other strange noises out there.  Tuning in and listening to them became a life-long activity from that point.

Why “Music for DXing”? – I made the finished collection of music in 2003 but I had begun work on some of the melodic aspects as early as 2000, and these years spanned a particularly immersive time for me in DXing as well as music-making.  I wanted to bundle together the two experiences and create something that might appeal to DXers as much as fans of electronic music.  The title owes something to Eno’s “Music for Airports” of course but in reality this is the wrong title for these songs; you wouldn’t want to listen to this when actually DXing as it would be too distracting.  Really I should have called it “Music of DXing”, or “Music for DXers“, but…I dunno…it’s hard with “re-issuing” things, even things that only had a micro-audience and were home-released.  One could completely change everything and re-title stuff, but it’s important I think to honour the original idea, even if in retrospect some things might seem daft.

Where did the song ideas come from? – Around late 2000 I started making what I called “tinysongs”.  These were quite minimalist, compact pieces of music that dealt more with the formal qualities of their own sound rather than melodies or harmony or even structure.  So they sounded like…sounds more than songs really.  They were all made with really simple waveforms and were the result of step-sequencing little patterns on the keyboard, or quantising rhythmic finger movements.  Like I would drum on my desk, and get a little rhythm going, and then I’d do that on the music keyboard; there’d be no reason to look for a key or harmony, I’d just do that and let the sequencer sort it out.  Afterwards I would edit out any really bum notes and repeat certain bits and so on, and I did things like really speed some of them up, or really slow them down.  Or I’d experiment with very hard panning of certain sounds or reassign the patterns to new samples that started one way, like a sound with a definite attack, but which ended another way, fading out or something.  I would set up multiple instances of the sample and spread the notes around so when there were no notes playing the sample would play on and create this drifting, dragging sensation.  Often the sequencer pattern would be something visual first rather than musical. Anyway, these “tinysongs” were fascinating to me but of course I thought they could only be “finished” if I augmented them with “proper” things like beats and basslines and pad sounds and so on, so although I sent them off to a few mates to listen to I kept them on file as potentially works-in-progress.  The thing was I could never make them sound any better with basslines and beats and so on, so they eventually become the core of “Music for DXing”.

At what point did you think to start blending them with the radio sounds? – I’ve incorporated radio sounds into my musical experiments for years now; in terms of other Spunkle material they feature a lot on “The Autumn Tapes” for example, but I’ve been making “music” using radios and tape collages since before I could play an instrument!  The radio is such a rich source of sounds, and as I mentioned earlier the late 90′s and early part of the last decade was a really immersive DXing period for me.  I was a member of various DXing internet communities and got into following certain stations and sending in logs to mailing lists and so on. This required loads of just listening to the radio and scanning around or sitting on random frequencies waiting for something to happen.

But there were times during that period when I’d want to listen to the radio and my usual frequencies would be really empty, or off-air, but because I had all these tapes and recordings of shortwave and I’d just listen to those instead. I realised I could make something DX-friendly with these, you know, make a set of songs which occupied those radio “atmospheres”, a certain sonic register.

What do you mean by “atmospheres”? – I guess I mean all of the groups of sounds and how they all layer together in the landscape of the listening experience. For example, it’s impossible to really hear “nothing” on the radio, particularly on the short wave frequencies; there’s always something there, even if it’s noise.  That in itself is part of DXing – sifting through the noise for something that you want to hear, and you start to recognise different bits of noise and so on. What a DXer ends up looking for is often very subtle – like when a station is about to come on air, they’re often just broadcasting silence. So the transmitter is on, but they aren’t playing anything.  If you listen, there’s a certain quality to the silence – it’s really hard to describe but it’s like fishing, or birdwatching and knowing there’s a change in the atmosphere that means something interesting is out there – and, well, that’s just describing some of the basic sounds of nothingness!

Then you’ve got things like utilities, like fax transmissions and radio teletype and morse code, and Hams, who are people speaking to each other like CB’ers, then actual stations that are putting out things you are meant to listen to!   I was spending all this time just listening to the radio and I was perfectly happy to just have one ear on the noise.  Anyone who was around me at the time thought I was nuts of course, but I had tapes and minidiscs full of recordings, often just expanses of noise where I’d left the radio and recorder going to capture the frequency whilst I had gone out or was doing something else.

Then there is the aesthetic of the broadcast aspect of shortwave.  For example, when I was younger a lot of the broadcast stations had “interval signals” which they’d play before a transmission to let you know you had tuned in correctly.  These would be a little melody that they’d repeat, and they’d sometimes have speech announcing the station as well.  Most DXers would know about these and I bet like me they loved them in and of themselves.  Things like the Radio Sweden song which was played on something like a vibraphone with loads of reverb.  It used to sound fantastic floating out there on HF.  It would go round and round with the voice announcing in different languages and then when the station came on air they’d play it again with a little tooty band.  I loved all of that.  Different stations have a different sonic fingerprint.

You mentioned about feeling that you had to develop the tinysongs with basslines and drumbeats and so on, and at some point you abandoned that; why? – I realised that the tinysongs didn’t get any better from having traditional song structures applied to them!  Beats didn’t necessarily make them any more rhythmical for example, and basslines and pad-type stuff just seemed to get in the way.  So I had this revelation that there would be no drums at all on this collection of songs, and whilst there might be low notes and high notes, there would be no obvious “basslines” or stuff.  I wanted them to be rhythmic and melodic and sonic all by themselves.  Like a dancer doing a dance about dancing.

So how did you merge the tinysongs into the DXing material? – I actually have very little recollection of the period where I actually put everything together, but I know that I went super-experimental with the songs after abandoning the “normal rules” of electronica.  The shortwave band is full of so many different types of sound, and I found I was looking more at those for inspiration. 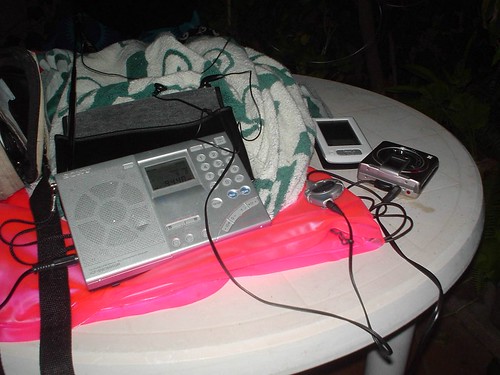 You see so many of the sounds you hear on the radio are not musical at all – they are designed to carry information.  So you have things like Morse code, which most people know about, but then there are things like radio teletype which sounds like a sort of dripping tap, but is actually text information that is carried via the radio.  There were weird stations like The Buzzer and Faders and of course all the numbers stuff and then stuff like fax stations which sound like a little grinder.  All these are things you can hear, but you aren’t really meant to listen to them on their own with an appreciative ear – they’re meant to be decoded or used with other equipment.  But I found them fascinating, and I’d think “what if this song had a tempo based on a baud-rate rather than bpm?”, or “what if this song was meant to carry information first and sound cool later?”  All of those things started to shape the structure of the songs.

There was an enormous amount of experimentation but at some point I guess I got the balance right for me – I managed to get it all together to sound like all the things I liked about DXing.

So if the songs were completed in 2003, what has happened to them since? – Well I “released” them myself back then.  I finished the songs at some point – I’ve no idea when now and I don’t think for whatever reason that I still have the original master – and I made copies of them with a little sleeve and so on and gave them to friends.  They were played in a nightclub in Oxford one evening in lieu of a live performance.  A couple who I never met but who I knew online had a server in Canada and they hosted them for me online for a couple of years, and all sorts of people in the radio communities online knew about it and got copies and so on.  I was even asked to create a special song for a group called WUN – Worldwide Utility News.  I made them a track called WUNsong which they put on their own CD-Rom that they released of shortwave recordings.

Are you still DXing? – Oh of course.  I have a lot of radios and often carry one with me when I go abroad.  I’ve had “DX-peditions” all over the world!  In the last few years I’ve been more interested in more normal types of station rather than noises and utilities, and I like to listen to speech stuff like hams too.  Sadly lots of stations have gone off the air, and at the same time the world of shortwave has got harder to listen to with the increase in interference from computers and things like power line adaptors.  I moved house a while ago and there is constant noise on the band now, and it’s hard to listen out for just pure radio.   It’s a real shame.