I’ve taken photos on and off for much of my life, starting as a kid when I got my first instamatic, through borrowing my brother’s SLR, learning how to develop my own photos in my late teens and then pursuing it as part of my art school days in my early twenties. But I guess my current passion for photography stems from the early part of the century when I discovered the resurgence in popularity of film photography via movements like Lomography. I’d never given up on film but had been reluctant to splurge on any digital gear knowing how fast things were moving, and when I saw what people out there were doing by taking photos on old cameras with old film I wanted to try it. 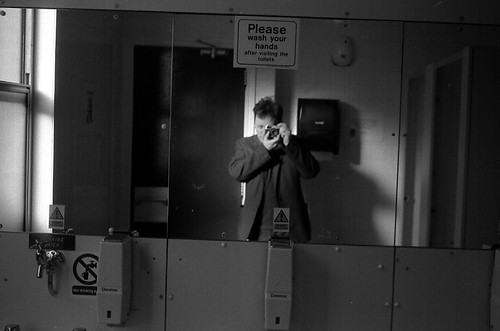 The move over to digital meant a happy coincidence of old photography gear being sold off and eBay, charity shops and car boot sales meant I acquired a lot of gear and took a lot of photos. The new place to show photos of course was the internet – things kicked off for me on Livejournal with the various camera communities on there, but I guess I found my real “home” when I signed up for Flickr in 2005.

One of the things I got into was buying “old” film as well as old cameras. One of the charity shop chains in my hometown makes a point of keeping all the cameras that are brought in and storing them until they go out to one of the city branches quarterly for a photography promotion. So you get to visit the shop and the window is usually full of cameras. I’ve bought some of my favourites from here – my Agfa Clack, Yashica Electro 35, Olympus Mju II and so on, but there are also usually lots of boxes of camera bits too, like lens hoods, cable releases, cases and tripod parts, and in there you can often find FILM. 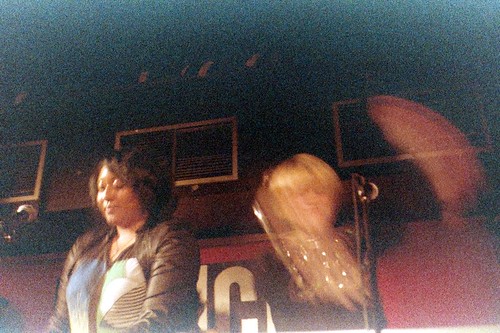 Part of the Lomography school of thought was to shoot old, expired film to make use of the strange colours and grain that you get when the emulsions go past their sell by date. Getting hold of old film was always a challenge as high-street shops didn’t want to sell it, but the charity shop route was a pretty good way to get hold of it for a good price. Some was obviously old film because it was made by companies who had stopped producing it, some was still in the box with the date on it and some was obviously pretty new but just in the canister, so it was all pot-luck and as any film photographer knows there’s a certain thrill to bagging an interesting stash of film.

So over the years I bought and used a lot of film in this way, and got some interesting results, especially with things like pinhole photography and cross processing slide film and so on. 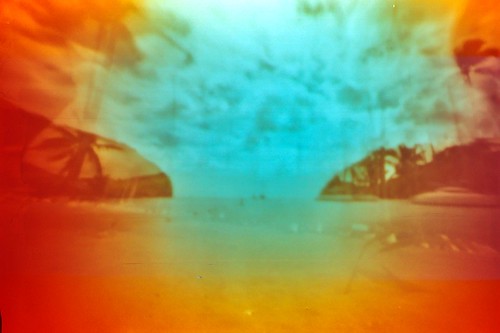 All this time too of course I was acquiring cameras too and when my sister gave me an Olympus OM10 for my birthday I wanted to test it out and reached for a film from my stash – no point in trying expensive Ektar 100 in something that might not work. The roll I chose seemed like a good all-rounder (I think it was Fuji 400ASA) and I ran it through the camera in the early part of summer last year, taking shots in my garden and in the park with friends.

I tend to save up films until I get around four or five before I get them developed, so it had been a while since I shot the film before I saw it. When I did I was somewhat confused, as there didn’t seem to be a test roll from an SLR in the scans I got back, and there did seem to be a “doubles set” in there.

Doubles, or double exposures, are another type of photograph that I like to take from time to time. The idea is that you take a film camera, shoot a roll and then rewind it and give it to someone else to take photos over the top of the ones you took (or you can do it yourself too of course).

The end result is a completely random mashup of images, often useless but sometimes intriguing – skies cut shapes out of portraits, objects and words appear floating at random on a wall, etc. If I knew a friend was off travelling somewhere interesting I would often prepare a camera for them and get them to shoot a roll before I took new photos on top of them on their return.

So I was intrigued when I went through the scans from the photo processors and finally realised what had happened. The roll of film I’d put through the Olympus OM10 was not only expired, but it had been used by someone else. Someone totally random, some of whose camera stuff had been donated to charity at some point, and whose film ended up being bought by me. 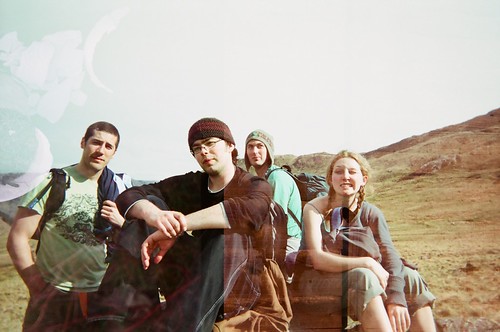 What transpires is that the film was first shot by a group of young people on a trip up a mountain. It looks like it’s in the UK somewhere (that isn’t guaranteed, but there’s a shot where it looks like the cars they travelled in have UK plates and it’s been pointed out that there’s a UK road sign visible in one shot, albeit blasted out by the flash, and a car that’s visible in one photo is driving away from the camera on the left hand side of the road). It looks like there are 4 guys and one girl, and that they stopped somewhere at a beach, either on the way or nearby. They also look like they are having a whale of a time. Since at one point they’re on a train I wonder if it’s Snowdon in Wales, but I can’t be sure – amongst other things the summit does not look the same as photos you can find on the net.

Now, of course, in using this film I unintentionally wrecked their record of their time up the mountain. But at the same time the film was forgotten about and who knows what might have happened to it? It might never have got developed at all for example. When I see their trip up the mountain I feel sad that I did take photos over the top of it, but I bought the film in as good faith as you can in a charity shop and given what happened, we can only examine the outcome and the circumstances that brought it here.

What fascinates me is there’s a huge element of chance to these images. Firstly I had no idea at all that the film was used; with a “conscious” doubles project you at least know that your own images are going to wind up merged with someone elses, but I was just using this film to test my new camera, hence the proliferation of garden-type imagery lurking in the corners of the images. 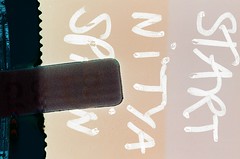 Similarly with an intentional double exposure experiment I’d normally make an effort to load the film both times to make sure everything lined up as best I could. But again since I didn’t know the film was used I just loaded it into the camera any old way, with the result that my images don’t fit perfectly on top of the other ones (in fact they seem to almost perfectly overlap in the centre of each other). That’s cool enough, but the framing on the scans themselves were chosen by the person who developed my films, and they chose the mountain photos over mine, so you have a third element of chance coming in. So, although no one meant the pictures to turn out this way, none of the people involved in creating them had any dominant say in how they did eventually reveal themselves.

The whole roll is here – I’ve oriented these wherever possible to show the mountain action over my testing of the camera, but at times there really are some interesting things going on where the two worlds collide:

I’m intrigued by many things about the original images in these photos of course; who are the people? Where were they and what year were they taken being the obvious questions (one observation was the late-90’s). Did they have a good trip? Are they still friends? Do they want the film back?! So many thoughts and ideas.

Since this is the internet, maybe someone will recognise one or more of them and let them know what happened to the film; add a comment if you know anything about these and we’ll take it from there. It’s a long shot of course but I did manage to find out where another “lost/found” image was taken by putting it on Flickr, so one never knows!

I made a video about this roll of film for my Photo Chat Vlog YouTube channel – check it out if you are intrigued!