The following text accompanied my artwork which was part of the show “Oh Brother, Where’s Thou Art?” at the Ultimate Picture Palace, Oxford, taking place between the 12th and 20th of May 2012.

“After 2001” has been produced for The 2012 Artweeks Exhibition “Oh Brother, Where’s Thou Art?” at the Ultimate Picture Palace in East Oxford by The Ultimate Picture Palace Artists. It is comprised of five pieces made of cardboard and paper pulp.  They are made in the dimensions of the monolith from 2001, A Space Odyssey, produced in 1968 as both a novel, written by Arthur C. Clarke, and a film, directed by Stanley Kubrick. Throughout both the film and book monoliths (black, oblong, slab-like objects) appear at points during the evolution of man and their presence is thought to encourage the use of technology in order to further evolution. 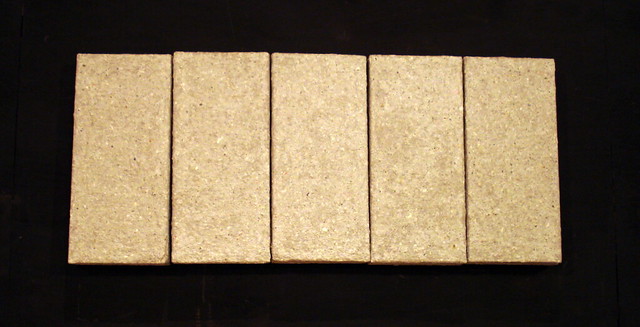 The work is part of an ongoing exploration of artistic forms which span painting, sculpture and the formal qualities of media.  But they are also about how time is spent, how things are made, how an activity becomes art, how things go wrong, how things change over time, and so on and so on (and so on).

When we first met as a group of artists to discuss exhibiting in a cinema, we agreed to make new artworks for the show with cinematic themes in mind. Using the monolith from 2001 as a basis, I decided to construct something with dimensions in the ratio of 1:4:9 (the squares of the first three integers as explained in the novel).

I started the project by continuing with a style of work I had been investigating for some time, creating monochromatic works somewhere between painting and sculpture using compressed paper pulp moulded into blocks.  The source material for this project was to be a set of encyclopaedias and to mould the paper pulp into the dimensions of the monolith the decision was made to use store-bought melamine shelving to create a rigid, reusable mould. One of the pre-cut sizes of the melamine would be used to determine the remaining dimensions of the monoliths.

Shelves measuring 18 x 230 x 600mm were bought and the dimension of 230mm was chosen as the width, making the final dimensions 57.5 x 230 x 517.5mm (it should be noted that throughout the Space Odyssey works the monoliths appear in a variety of sizes, but all in the same dimensions of 1:4:9 – at one point it is revealed in 2010, the sequel to the novel of 2001, that the monolith is only ever one size, “as large as necessary”).

My initial calculations suggested that I’d get five monoliths out of the full set of encyclopaedias, which offered the immediate realisation that five of any sized monolith also become one half of a larger sized monolith.

ents however pointed straight towards catastrophic failure.  Not only was the volume of shredded paper too big to easily pulp in a kitchen blender, the paper itself did not hold together easily when compressed and the size of the final block contained so much water that it did not dry out easily – it eventually collapsed and was attacked by birds after I put it in my garden to air dry.

It was time to try again.

I started again, this time deciding to create cardboard supports which I would cover with a paper pulp and glue mixture. The dimensions and number of monoliths decided on from the moulded block technique would be retained and sufficient corrugated cardboard was sourced, cut and glued to create five supports.

It seemed obvious to me that since we currently live in the year 2012, the objects could easily be created from material from the year 2001. With this in mind I decided the paper pulp would be made from a copy of The World of Interiors from April 2001.

In Michelle Evans’s 2001 Timeline(1) it is suggested, based on information from the original screenplay and the only date shown in the film, that the monolith discovered on the moon by modern man is encountered in April 2001.  Until April 2001 in both the film and the book modern man, although he is curious about what lies beyond the inner planets, is satisfied that he is alone in the Universe. Life in the film is portrayed as modern, exciting and adventurous (and a logical progression from the space age of the late 1960’s when the project was conceived) but  nevertheless, to the characters in the film of 2001 space travel and the other science-fiction, futuristic concepts within the film are a commonplace part of life.  Using the April 2001 edition of The World of Interiors as part of the artwork is an acknowledgement of the unremarkable aspects of both the fictional and real year 2001.

Pulping the magazine deconstructs and dematerialises in an instant all of the information and the entire effort expended in creating it. At once all of the words, images and adverts are made equal and part of a whole (albeit a mass of paper and glue).

The subsequent labour of covering the supports with the pulp offers a minimum of creative opportunity beyond all-over monochromatic non-composition. In its final form there are no emotional cues to the origin of the work, and the objects remain aloof and unremarkable, like some sort of acoustic treatment or structural intrusion (even though the surface, at first appearing like concrete, under scrutiny contains a plethora of colours and textures).

We know for example that each time a monolith is discovered, man is forced into to consider his relationship to his own existence in space and time, whether it is early man discovering the use of tools as a way out of starvation and a way forward with domination, twentieth-century man being confronted by evidence of intelligent life outside earth, or Dave Bowman journeying through the stargate “Beyond the Infinite”.

Placing the monoliths made in part from materials from the year 2001 in the cinema sets a less significant, subtler, but no less intentional confrontation.  The artwork functions as a reminder of the need for the suspension of disbelief required for entertainment.

In Kubrick and Clarke’s 2001 we are expected to believe that in that year human interplanetary travel and the evidence of extra-terrestrial intelligence was a reality.  An object referencing that work, created from culture from the year the work actually depicts is a memento for how  sometimes the future isn’t going to be all we imagine it to be.