I am a longtime Flickr user but since I’ve never had a pro account (so far) I have lost track of the number of images I have uploaded in the six or so years I’ve been active on there (Flickr allows you to upload lots of images but if you have a free account you can only see the last 200).

I don’t take photos that rank enormously highly and the sheer number of images that are uploaded daily to Flickr means that most of mine will remain deep in its miasma until the day I do go pro, when they will all be revealed. Flickr does at least remember what you own, even if it’s hard to find!

Every now and again someone will “favourite” or comment on one of my old images and I’ll get a notification. I do like Flickr’s group system, so do occasionally get comments about my old polaroids or more experimental photos, and then I will be able to see how many views an image has had. From what I know my pictures rarely go over about 150 views, which is fine by me as I’m not trying to make a living out of photography and just enjoy the experience of sharing my pictures with likeminded types.

However, one image has surpassed all the others in terms of views – and I didn’t even create it with a camera! 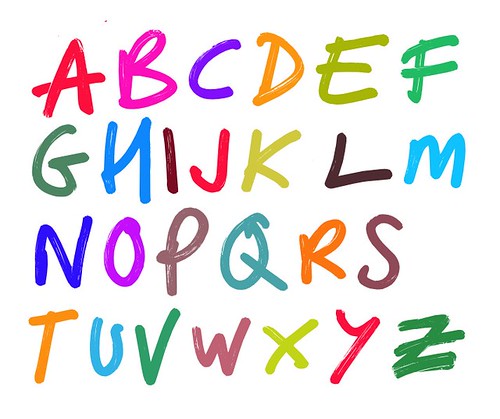 This is an image I made using Inkscape, a free scalable vector graphics editing program. It’s a scan of my own handwriting, converted into an SVG using Potrace, and coloured in using Inkscape’s fill tools. This image currently has 11,351 views, simply way ahead of any other images I’ve ever submitted to Flickr.

My own reasoning for its popularity is that it ranks quite highly in Flickr’s search for “SVG Alphabet”, and that really is all I can attribute it to.

Either way, by way of thanks to all the people who’ve checked it out, you can now download the original SVG file here, and use it according to its Creative Commons licence.

Jimfont by James Snowden Davies is licensed under a Creative Commons Attribution-ShareAlike 3.0 Unported License.
Based on a work at www.zogue.com.

Note: I’ve called it Jimfont, but it really isn’t a font in any practical sense like an opentype format that you can use in a word processor. But if anyone wants to create it as one, do leave a comment.