On an autumn Monday night a colleague and I saw Thomas Dolby in concert at the Academy in Birmingham. Not so long ago I would have had this on the “this would never happen list” but since so many things that I thought would never happen keep happening, I’ve almost given up being surprised these days. But I am a big TD fan so I couldn’t help but be excited by the prospect of seeing him play live. 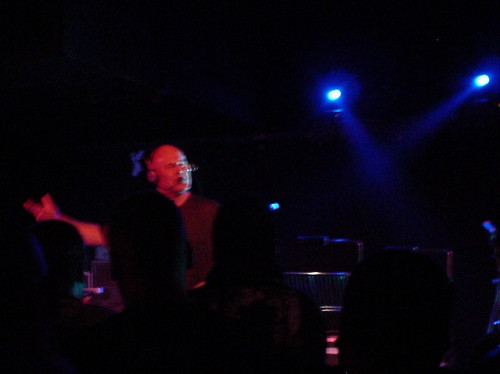 There was no support, so we were kept waiting for some time, studying the gear and trying to find a place where we could view the gig with max efficiency. In the end he popped out onto the stage, apologised for keeping us waiting and tentatively sparked up things with “Airwaves”, which was just about as good a start as you could imagine; prime, first-LP thoughtfulness with great imagery. There was a slight struggle to stay in tune during the choruses which added to the vulnerability that I’ve always felt permeated the song, and, combined with the almost silent, open-mouthed “OMG this is really him and it’s really happening!” reverie of the audience, it made for a really special start to the gig.

My gig memory is never photographic and I don’t make notes or steal setlists, so I can’t do a wholly accurate song-by-song breakdown, but suffice to say this was a gig of two halves. The first part was Mr Dolby himself and his machines, playing a mix of mostly the first and second LPs, doing songs like “Europa and the Pirate Twins”, “The Flat Earth” and “One Of Our Submarines” as well as the new song “Your Karma Hit My Dogma”. Each song was interspersed with a great deal of chat and anecdotery. The second half saw the appearance of a horn trio; the plan had been to bring the Jazz Mafia over from SF but they had visa problems so these were an English trio. These brought a loungier feel to the proceedings, with more material from “Aliens Ate My Buick”, such as “My Brain is Like a Sieve”, “Airhead”, “May The Cube Be With You”, “The Key To Your Ferrari” and two cover versions, “What I Like Most About You Is Your Girlfriend” by The Special AKA and a somewhat tongue-in-cheek but very well executed rendition of “Sway” by Dean Martin. We also got “Hyperactive” which was trombone-tastic as well as “She Blinded Me With Science”. Notably IIRC we got nothing from “Astronauts and Heretics” (or did we? Correct me if I’m wrong…)

I have listened to so much Thomas Dolby over the years that it was never going to be a disappointing gig, but…it wasn’t without niggles. Am I allowed niggles? I feel bad singling this stuff out but it has to be said; bits of this concert were somewhat “Casio”, notably in the drums and bass department. I know all too well from my own endeavours that trying to replicate electronica live onstage without resorting to backing recordings is a struggle, and I know that one of the key points of the new TD live ethos is to build the songs from the ground up with as much live playing as possible. So for many songs we got to hear (and see if you were tall enough) the beats and basslines and melodies being programmed in as the songs built up, and you could see how the parts of the songs made up the whole really well. But since (to my ears at least) TD is an artist who always seemed to take care to find the “bon-bruit” in his recordings I couldn’t help thinking that a bit of “squidge” here and a dab of reverb there would have really helped; no-one wants to go to a backing-tape gig, but the rendition of “Hyperactive” was missing the marvellous thundersheet drums and poor old “The Key To Your Ferrari” sounded like a beatnik ringtone in places (the limits of the electronics being all the more contrasted by the liveliness of the horns).

On our post-gig dissection on the way back home my friend described it as being “The GM Experience” in places, though we both agreed that “Your Karma Hit My Dogma” sounded much more “whole” as it was a probably a new song being played on the rig it was written on. It should be said incidentally that from our position the mix from the stage was faultless, and the horns mixed with the electronics really well.

But…that aside, it was Thomas Dolby playing live! Moreover it was Thomas Dolby playing live and in a club in the UK and not as part of some nostalgia tour. There were so many people who were happy that he was out there playing for us, and there was that feeling that happens in a really good gig where you think “wow, they’ve come out to see me and they’re playing the songs I want to hear!”. The between-song banter was great, and despite my reservations about the dry bass and drums in places, most of the solo sounds and atmospheres were really good.

“Airwaves” and “The Flat Earth” were awesome, “She Blinded Me With Science” was wonderfully absurd, and “One Of Our Submarines” was fascinatingly executed (even if it was missing the kick and the snare from an expired piece of demo software…). The trumpeter also contributed some mean falsetto backing vocals when he wasn’t trumpeting, which really lifted the songs.