The operative phrase here is “never say never”. I’ve been a major fan of Scritti Politti since Wood Beez hit the charts in the mid-80’s, and always knew of them as a studio entity; this was a “group”, with a constant member in Green Gartside, who made exceptionally deluxe music in the studio, but who hadn’t played live since the *really* early 80’s in an earlier, punkier incarnation. 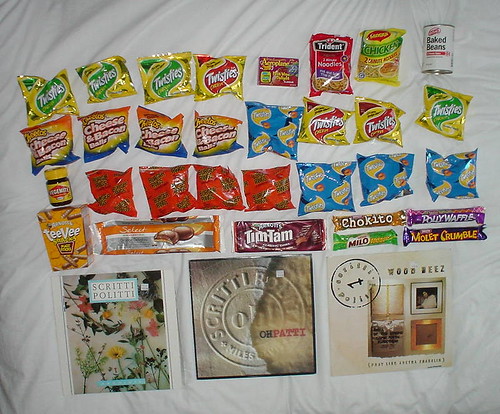 Over the intervening years I’ve played “Cupid and Psyche” endlessly, got into a few tracks on “Provision”, really dug “Songs to Remember” and flipped over “Anomie and Bonhomie”, but all the while I took it as red that this was music made in the studio, almost *by* the studio (and with the band having disappeared for much of the 90’s, there wasn’t a great deal of it to listen to either). When I got into the Internet in the late 90’s and searched for information on them I bookmarked various sites, but things were quiet. A&B came, but time and again the message was clear; Green was a private person who might be somewhere in Wales, or London, or even in New York, Scritti weren’t ever likely to play live, and we’d just have to wait for new material, if any was coming at all.

Then, just before Xmas a new track, “Boom Boom Bap”, was played on 6 music, and then, lo, lo and thrice lo (and behold) earlier this year the insane and unthinkable rumour hit that Green might just be going to appear on-stage in London under the name “Double G and the Traitorous Three”. I wasn’t *certain* this was going to be the same Green Gartside, and didn’t go to the first gig, but…wow, it really was true. Never say never!

It was essential that I saw them the next time therefore, and hooked up with a friend and friend of said friend to see their second gig, at the Luminaire in Kilburn. What follows is a very rambling recollection of all sorts of memories from the night, with the music being the one thing I could remember least of…:S

Support was from Polly Scattergood (who I more or less missed, but who played solo with an electric piano), followed by Wet Dog, who were tremendous fun. Their set spluttered to a start as the drummer stopped almost straight away to engage the snare on the snare drum, and the all-female trio were joined occasionally by a chap who came on-stage to augment parts of songs with a small keyboard, trombone, kazoo and what looked like a duck-call replacing the mouthpiece of the trombone. At times I was struck by how much the simplicity of the music sometimes echoed the Scritti material on the “Early” album, especially the boisterous drumming and anchor-like bass. On the whole however the performance was definitely more surfy/garage-y, with some interesting vocal interplay between the bassist and singer/guitarist (who were playing a Squire Precision and Tokai Rickenbacker copy respectively). 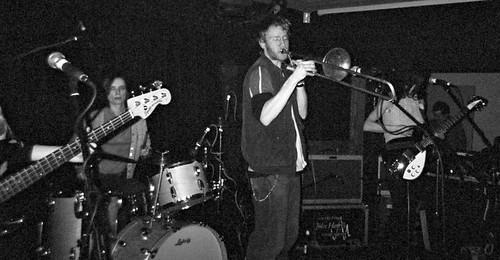 Post Wet Dog a stage-hand came on to set up the Traitorous Three’s electric instruments, whilst the drummer augmented the shared kit with various items of percussion. After a short wait the band filed on-stage to great anticipation and Green opened the performance with something of an impromptu spiel.

He introduced the group as ‘Double G and the Traitorous Three, Plus Two” and explained that this was the first gig by the line-up appearing on-stage (GG plus drums, guitar, bass and two keyboardists). He then explained (though not in these exact words) that we ought to treat the performance in the spirit of a shared rehearsal, and that they hadn’t fully mastered all of the songs. He also said that if we ended up having half as much fun as them, then they’d have twice as much fun as us. He then made one more comment that the first song had a backing track, and so went almost straight into Boom-Boom-Bap, which sounded awesome; this is Scritti as you’d expect it, with lush electronic tones and beats, but of course the voice of Scritti Politti was there, singing in front of us in a small venue in London (although it did seem odd watching him sing along as the rest of the group stood on-stage, not playing and waiting to start themselves); could anyone have ever predicted this? NEVER SAY NEVER! He looked more or less like the photos promoting Anomie and Bonhomie, with a considerable beard and chin-stud. 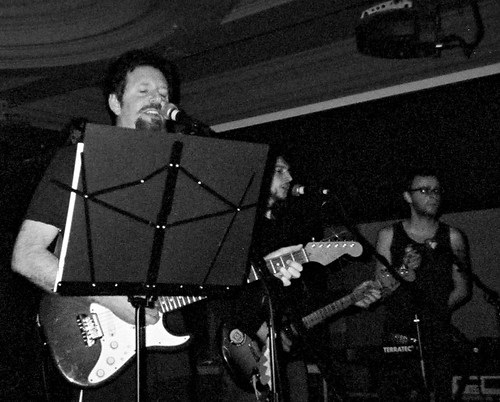 Backing track over, if I were to liken the classic output of Scritti Politti to something like a Porsche – slick, deluxe, impeccably crafted and with no visible sign of how the shiny thing in front of you actually works – then what followed was like the designer turning up at the pub with some new sketches on the back of a napkin and a bag of spares and tools and saying “let’s see what we can do with these…”, and so the group-proper kicked off with a groovy instrumental jam, based around a guitar riff from Green, which had a bluesy progression to the chords and reminded me of Peter Green era Fleetwood Mac.

As you can imagine almost immediately I thought that this was very different music to anything Scritti Politti had released. Then of course, within the twinkling of a split-second I remembered how different A&B was from Provision, and how different Songs to Remember is from C&P85 and so forth, and before you knew it I’d actually remembered that this of course *wasn’t* Scritti Politti – it was Double G and the Traitorous Three (plus Two). In the light of the preamble I got the feeling that in this line up at least was very much a let’s-do-it-and-see-what-happens project, and that they were definitely playing together as a band and not merely backing Green up.

This was followed by…well, as I mentioned earlier, the music was what I recall the least details of; this has always happened with me and gigs for as long as I can remember, right back to my first ever proper gig (which was, erm, Dio at Leeds Queen’s Hall in ’86). I like to think it’s because I’m *there*, being there and not thinking too much about anything other than exactly what’s going on, but in this instance I really *was* unfamiliar musically with all of the material other than “Boom-Boom-Bap” (though I’d read the reviews of the first gig and recognised the song about Jesus). At one point there was a technical hitch with one of the keyboards which was meant to play a special sound similar to something on a DJ Premiere record, and once it was sorted it went into a funky, jittery song about a monkey and negligee. I’m pretty certain they did a cover version of a rap record too at one point, and another notable moment in another song was when the bassist gave her guitar to one of the keyboard players and sang a duet with Green.

There were more songs, and more technical faults, and maybe it was me but at some points Green seemed in a hurry to get everything done. But from where I was stood (and I think within the rest of the crowd) all was forgiven as it was just so incredible to see the guy up on-stage and making music. And then, before you knew it…it also seemed over all too soon. But when the band returned for an encore (after much of the gear had been turned off) they played particularly well. Green mentioned that they didn’t know any more songs, but everyone was happy to hear another stab at the monkey-and-negligee song again. 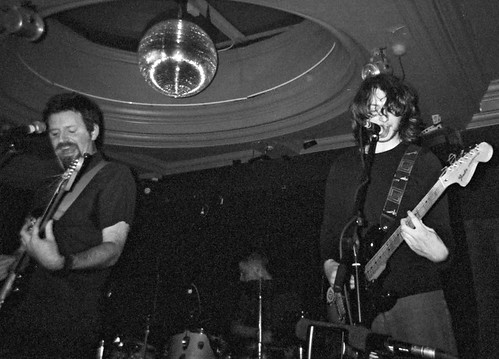 In short, on the whole I think the set could be described as mid-paced, guitar led songs, with harmony vocals and keyboard augmentation. The band worked really well together, in particular the drummer who had effortless and excellent technique, and, by-jove-but-I-had-to-keep-reminding- myself on top of it all of course was the unmistakeable voice of Green.

Talking after the gig as we got our coats, the friend of a friend who joined us explained that though she had never heard anything Scritti related before, she was suitably impressed, which gave a nice not-just-a-music-geek slant to the evening.

A new album is promised this year, which I presume is going to be more of a Scritti Politti, Boom-Boom-Bap type thing. It’s all the more exciting that with news of more gigs there’s also a Double G and the Traitorous Three thing going on too.

GEEKY FOOTNOTES – Green had printed lyrics on a music stand and I noticed that as he completed a song he’d put the “finished with” lyrics on the floor. The sheets had a green marker-pen design which seemed to be a Double-G and the Traitorous Three logo. I also noticed, being a guitar geek, that he was playing an early 80’s red Fender Elite Stratocaster, through a Roland guitar multi-effects unit and a Fender amp. His guitar sound was very jangly with lots of reverb. The bassist played a 5 string Musicman Stingray, and the other guitarist played a sunburst Fender Stratocaster which looked like it had been modified to have only one volume control.